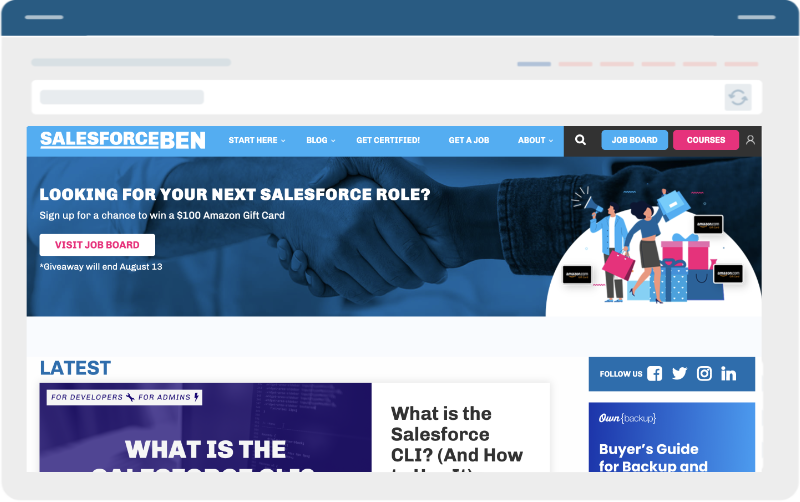 How Convesio Made Scaling To 300k+ Traffic Look Easy For A Popular Industry Publication and LMS Site.

is an independent news site that focuses on Salesforce, one of the most successful Customer Relationship Management software companies in the business world today. With over 70,000 employees and $26 billion in annual revenue, the Salesforce ecosystem is huge, which has created opportunities for businesses like SFBen.

SFBen is run by Ben McCarthy and has two sites, one covering the latest news in the Salesforce world and the other offering a number of online courses to build Salesforce skills. These online courses include guides on getting a job at Salesforce, how to pass Salesforce Administrator exams, building a freelance business based on Salesforce, and more.

Founded by Ben McCarthy, Salesforce Ben is run by a small but mighty team, excited about distributing knowledge from the Salesforce community and uncovering the next big thing in the ecosystem – without jargon, hard-sells, or fluff.

Salesforce Ben is a community of 400+ Authors sharing our ideas and advice for 310k+ monthly readers.

Before switching to Convesio, the biggest issue facing SalesForceBen was the frequent downtime. The site went down multiple times a month and problems only increased as the audience scaled:

Cloudways was pretty good, but the site used to go down a lot, probably about once every 2 weeks or so. As we started to scale to 200k+ monthly users and beyond, the problems got worse. This was extremely frustrating, stressful, and whilst the support did help to fix it, they provided limited scope in what they could debug.

Premium advertisers were not happy with this frequent crashing. Neither was Ben, as he needed to cover the latest news about the Salesforce world as it happened. The Cloudways support team, while helpful, didn’t have the ability to debug and solve the problems we were facing.

As the site grew, SFBen began to have traffic issues with their host at the time, Cloudways. In particular, the site went down frequently, especially under high-traffic events. After a tip from a friend, Ben switched to Convesio. With our individualized approach and deep expertise in scaling WordPress sites, Convesio solved all of SFBen’s issues,

In this case study, we’ll take a look at SalesForceBen’s website and how Convesio constructed a powerful, scalable hosting plan for their particular business situation.

The Switch to Convesio, a Host with Proven Scaling Experience

Then, a friend working in infrastructure recommended Convesio, primarily because of our experience with scaling WordPress sites. The issues with Cloudways kept getting worse, so he decided to migrate from Cloudways to Convesio. While the cost was more than his previous hosting plan, he found the decision to be completely worth it:

I wanted to move to a more scalable provider, and whilst $500/month was quite a bit more than the $200/month I was paying, it was a pretty easy decision, in the end, to have peace of mind that my site would be up all the time with minimal issues.

He also liked the high availability of Convesio’s WordPress hosting, especially the extensive experience with high-traffic media companies. This made him feel reassured that his site would be able to handle bursts of traffic.

…I was very impressed with the Convesio team’s knowledge, they understood what I was going through, and worked with other high-volume WordPress media sites, so this gave me peace of mind.

After switching to Convesio, Ben also found the migration process to be reassuring. Unlike some other hosts, we create a Slack channel just for you, then walk you through every step of moving the site from your old host to Convesio’s servers.

The support factor definitely played into it, the fact they created a Slack channel, guided me through the site migration, as well as supported me through a few issues we had post-migration.

The Convesio team was also able to solve Ben’s Apache server issue by keeping the news site on Nginx, with the Courses site on Apache. With Convesio, you can have different flavors of web servers depending on your particular use cases.

In terms of technical details, SalesForceBen has two sites, with the first server utilizing PerconaDB, CF Enterprise, Nginx, and Redis Object Cache Pro. It is built on Elementor Pro and also uses ACF Pro and the Events Calendar plugins.

The courses site is running on an Apache server with dedicated MariaDB and runs a variety of LMS plugins, including BuddyBoss Pro and LearnDash, as well as WooCommerce to handle payments. It also implements Redis Cache Pro to handle caching.

Since switching to Convesio, the two websites have only gone down “once in five months,” a drastic improvement over the previous hosting setup on Cloudways. The site also performs well under heavy traffic loads, especially when viral Salesforce news brings thousands of visitors to the site at a single time.

Ben can now focus on creating content for his Salesforce audience, insteading of worrying that his site will go down at critical moments.

Are you a WordPress media site that crashes under viral traffic loads? Take a look at Convesio, the best host for scaling WordPress websites.

Initially, I was very impressed with the Convesio team’s knowledge, they understood what I was going through, and worked with other high-volume wordpress media sites, so this gave me peace of mind.

The support factor definitely played into it, the fact they created a slack channel, guided me through the site migration, as well as supported me through a few issues we had post-migration.

Get Started
Book a Demo 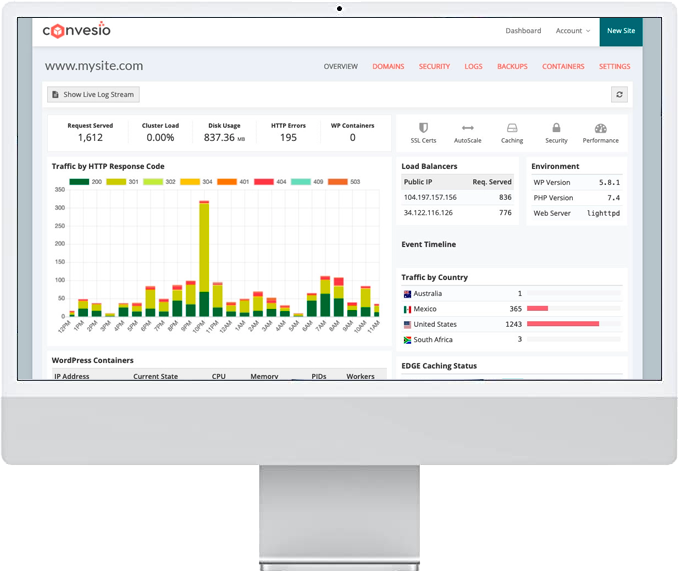