Automattic acquired WPScan, a WordPress security vulnerability database company founded in 2011. The plans are to make WPScan more open and integrate it further into Jetpack Scan. WPScan founders, Ryan Dewhurst and Erwan Le Rousseau, have joined Automattic as part of the Jetpack team. WPScan customers should not be affected in the short term by the acquisition.

In perhaps the biggest news of the year, Pagely announced that it was been acquired by GoDaddy. Pagely will focus on improving GoDaddy's WooCommerce offerings. You can watch a one-hour detailed interview between Cory Miller, Josh Strebel, and Beka Rice on YouTube.

According to Sarah Gooding at WPTavern, Automattic did not have any knowledge of Google throttling non-AMP ads prior to establishing a partnership.

Marieke van de Rakt announced that she has stepped down as CEO at Yoast and has been replaced by Thijs de Valk. de Rakt is stepping back from the company to spend more time with her family. She plans to continue working at Yoast as a creative marketing manager.

Black Friday has come and gone but in the myriad of websites publishing deals, this landing page by Ben Townsend deserves a mention. Between the retro colors and the overall feel of the page, I think it is one of the best designed out there. Have a look and see for yourself.

WordPress 5.8.2 was released which fixed a security issue in addition to two bugs. Since it's a security release, folks are reminded to double-check to make sure your sites are running the latest version.

State of The Word Scheduled for December 14th

Matt Mullenweg will be delivering the State of the Word from Automattic's satellite office in New York City, December 14, 2021, between 5 and 7 pm ET/10 – 12 am (December 15) UTC. He'll be summarizing what's happening in the WordPress ecosystem and he might even talk about subjects related to Web3 and Blockchain.

Liquid Web acquired Modern Tribe, a long-standing development agency. The agency will continue to exist as its own entity while keeping existing leadership intact.

GoDaddy discovered that on September 6, 2021, an attacker gained access to their systems using a compromised account. The attacker has access to customer email addresses, SFTP passwords, database passwords, and SSL private keys for at least two months. The attack was not limited to GoDaddy as customers hosted on Media Temple and other resellers were also affected.

Jeff Chandler
I like trains, weather, 90s grunge music, comedy, and being as real as a WYSIWYG editor. I am the engineer of WP Mainline where I write and talk about WordPress 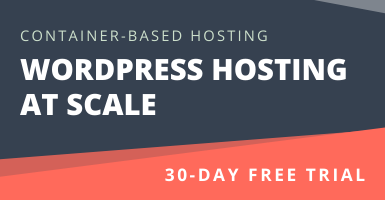 You can follow Bob Dunn on his cross-country adventure to attend the State of the Word in person via the #WooTrainClan hashtag on Twitter.

Hey, if you want to follow my adventure to State of the Word and back, check out my landing page on my site https://t.co/sDm1FIoA2B#WooTrainClan

You may also be interested in
5 Pro Tips To Scale WooCommerce for High Volume Ecommerce Stores
No Comments
Learn how you can optimize your WooCommerce store to handle spikes in traffic and high-volumes of concurrent transactions and avoid losing sales.
Read More...
Interview with Iain Poulson of WP Trends
No Comments
We're focusing on WP Trends in this interview as a lot has happened in the WordPress ecosystem this year, but Iain works across many...
Read More...
WordPress News Roundup - December 2021
No Comments
WordPress 5.9 is delayed, more acquisitions, and Black Friday deals.
Read More...