How Scaling Out is the Future for WordPress Hosting

Scaling “Out” is the New Scaling Up -- Tom Fanelli, Convesio

When I was running my design agency a few years back, I spent a lot of my downtime working. You know the drill, customers calling outside of office hours because of some kind of problem with their site. More often than not, the problem was hosting-related.

As a business owner, it’s already hard enough trying to take off time to relax! But with dozens of clients hosting their sites with our agency, we had a responsibility to ensure their sites were always online and running smoothly.

Unfortunately, our hosting provider didn’t make this easy for us — which led to all that time spent on the phone with clients who were upset because their site was down.

When I got tired of dealing with the same old hosting problems on repeat, I went searching for “unicorn” hosting that could meet our agency’s needs. What I wanted was fairly straightforward: hosting that was redundant, managed backups, and could scale, all for a reasonable price.

I discovered a couple of providers that offered the kind of high-availability redundancy I needed, but they were way too expensive at $400 a month for one site. Most agencies simply can’t afford that, or would prefer to allocate that money somewhere else.

I was frustrated. The competition was offering shared and VPS hosting that was prone to zero points of failure — hosting which just doesn’t cut it for agencies that want to know their client sites won’t go down.

I realized there was a gap in the hosting market. Why wasn’t there a managed WordPress host that catered to the needs of agencies? Why didn’t it already exist?

So I sat down and thought about what “unicorn” hosting would actually be for an agency. Obviously, it needed to be high availability, really fast, and backups were critical. It also needed to be able to scale at a moment’s notice.  I wanted all the little technical tasks that take up more time than I liked taking care of too, such as applying SSL certificates and updating WordPress and plugins.

I wanted all of these things for my own agency, but I also wanted other small and medium businesses to have this kind of hosting for an affordable price.

That’s why we built Convesio.

Convesio is now in beta and agencies that have come on board are already benefiting from our next-generation managed WordPress hosting. Convesio is the first self-healing, autoscaling, platform-as-a-service for creating and managing WordPress sites.

But more importantly, it’s the managed WordPress hosting I wish I had when I was running my design agency.

Our beta users tell us all the time about the issues they were experiencing with other hosting companies before switching to Convesio.

Take M&M Multimedia, for instance. They were having to deal with unreliable server performance and client sites running slow during peak times. When they tried to contact hosts for help, they were met with excruciatingly slow response times — simply not good enough when you’re paying for hosting that promises expert support.

It that wasn’t already bad enough, site outages and downtime were costing M&M Multimedia money. They were spending so much time dealing with hosting and technical issues that it was taking away from valuable time that could’ve been better spent nurturing client relationships.

Unfortunately, these kinds of issues are widespread when it comes to traditional hosting. When you’re managing client sites, anything less than world-class managed WordPress hosting is a disaster waiting to happen. It means your client sites crash when there’s an unexpected spike in traffic, and it means your sites are vulnerable to single points of failure.

Single points of failure happen all the time, even across hosts using cloud infrastructure. They can be anything from a faulty network switch to a power failure at a data center. Or — now here’s every agency’s nightmare — a concentrated burst of traffic that crashes one client site and brings down every other client site on the same server.

This domino effect of hosting failures, together with the inflexible, and bureaucratic pricing models that traditional hosting companies impose on agencies is outdated and, frankly, unfair.

For agencies that need hosting for dozens of client sites, not just a handful of sites, issues around capacity and pricing are even more compounded. If you have one client who’s getting 100,000 visitors a month and 10 other clients that only get 5,000 visits each, you’ll undoubtedly end up purchasing a package based on your largest client’s needs.

It’s unfair, and it’s time traditional hosting companies with their set capacity and rigid pricing were challenged. That why at Convesio, we have pay-for-what-you-use pricing. You’re no longer forced to purchase bulk site plans designed for a one size fits all model just to get a reduced average cost per site.

Scaling “Out” is the New Scaling Up

With traditional VPS hosting, when you start pushing the limits of your hosting package, you’re told you have to scale “up.” Basically, you’re forced onto a more expensive hosting package so you can get more memory and resources added to the VPS. Inevitably, you’re given more resources than you initially need, so you end up paying for some unused resources. (What was I just saying about unfair pricing…?)

With Convesio, you don’t scale up, you scale “out.”

When our platform detects a surge of traffic to any of your WordPress instances, multiple containers are automatically deployed, splitting the traffic between multiple instances to handle the extra load. This means that if any of your client sites is unexpectedly hit with traffic, you don’t need to panic.

Convesio is the first scalable managed WordPress platform powered by Docker containers. I mean, scaling out just makes sense. When you’re working with clients on their marketing strategies, you’re always looking out for that one piece of content that’s going to go viral. But it’s all for nothing if your hosting fails right when you need it the most.

With Convesio, you can trust that your sites aren’t going to go down. If any of your sites come under a heavy load, Convesio makes it simple and seamless to instantly scale out your sites, completely automating the entire process.

We’ve streamlined and simplified our hosting platform to suit the needs of agencies. Our container-based hosting architecture scales with your sites for “when you need it” capacity. There’s no need for you to deal with complex cloud infrastructure; you don’t need to configure load balancers or Docker containers, or even get in touch with us to scale your hosting. We take care of it all for you.

How do we do it? Through a combination of open source software and proprietary code, we’ve solved the challenge of running WordPress in a high availability scalable environment.

Convesio’s hosting architecture separates all the individual components into layers. The load balancers elastically scale, and under that, a Node.JS load balancing firewall where there’s also a custom-built caching layer. Then there’s a PHP runtime layer where your WordPress site lives, and this layer also scales independently. And under that, there’s a database cluster that — you guessed it — independently scales.

This kind of high availability managed WordPress hosting has, historically, cost somewhere in the $1,400+ per month range. It’s expensive because it’s technically a very difficult challenge to solve. But Convesio has solved it, letting you create a multi-tenant WordPress site that scales into multiple notes, all for just our (limited time) beta price of $10 a month.

Convesio is offering the next generation of managed hosting for WordPress

Tom Fanelli
Over my career, I have worked in both small business and Fortune 500 companies. I have had the honor of being a presenter for organizations like Microsoft, Intuit, Sage Software, RealPage, NARPM, NAA, and the Small Business Administration. Most recently I completed my first ebook, Infographics in Action, which teaches exactly how to create and market with infographics. Currently, I work in San Francisco and reside in the bay area with my wife and four children. Feel free to drop me a line, I would love to hear from you! 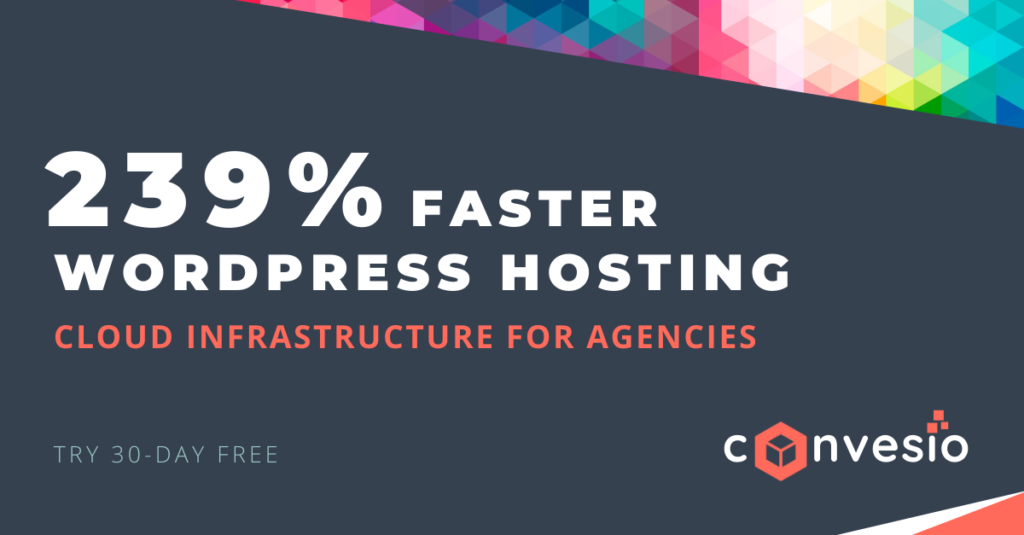 We’re not just competing with other managed WordPress hosting companies on price, we’re also offering something I know agencies need because it’s something I desperately wanted — full-stack technical support.

If you’ve been running your agency for several years now, you’re probably managing dozens of client sites. They’re probably hosted with a variety of hosting companies and technologies, with varying levels of performance. I’m guessing it’s a nightmare to manage (because it was for us).

With Convesio, you can bring all your client sites together onto one platform and we’ll take care of all tedious and time-consuming technical tasks.

You know the ones — all those “easy” tasks like setting up SSL certificates and doing site migrations. They weren’t such a big deal to do when you only had five sites to manage, were they? But now you’ve got 100 sites on your books, it’s costing you time and money.

At Convesio, we take care of all those technical tasks for you because we’re a managed WordPress host that actually manages your hosting.

We’ll look after your backups and WordPress updates. Got a customer who’s anxious about launching their new site? We’ll step in to help and make sure the launch goes smoothly.

We’ll also take care of your caching, malware scanning, and you know that expert support other hosting companies take forever to provide? Well, you don’t even need to raise a ticket with us when you need help — we actively monitor every site on our platform and if we notice any issues, we jump in and fix it. We’ll identify and resolve any issues with your sites before you even know there’s a problem.

Our aim is to help ease the burden of time-consuming hosting tasks so you can get back to working on client sites, not managing client sites. We want to value-add for your agency and provide the kind of hosting that agencies have been waiting for.

Convesio: The “Unicorn” Managed WordPress Hosting I Wish I Had for My Agency

Remember M&M Multimedia I mentioned earlier in the piece? Well, they migrated all 100+ of their client sites to Convesio. Our platform now handles around 500,000 page requests a day for their sites and to date, there has been zero downtime. How’s that for managed WordPress hosting?

Convesio is the next generation of managed WordPress hosting designed for agencies, by an agency. We understand your needs because they were our needs. Like I said on this blog recently, Convesio is the hosting company I wish I had all those years ago.

So have we built unicorn hosting for agencies? I think we have, but you’d have to ask our customers for their honest answer. Or just try out our platform for yourself.

If you have any questions or would like to chat, let me know! You can reach me directly: [email protected]

You may also be interested in
5 Pro Tips To Scale WooCommerce for High Volume Ecommerce Stores
No Comments
Learn how you can optimize your WooCommerce store to handle spikes in traffic and high-volumes of concurrent transactions and avoid losing sales.
Read More...
Interview with Iain Poulson of WP Trends
No Comments
We're focusing on WP Trends in this interview as a lot has happened in the WordPress ecosystem this year, but Iain works across many...
Read More...
WordPress News Roundup - December 2021
No Comments
WordPress 5.9 is delayed, more acquisitions, and Black Friday deals.
Read More...