In 2019, the rest of the market has evolved. People are smarter about their websites than ever -- legacy hosting providers simply don’t cut it anymore.

I’ve been building websites for 20 years and without a doubt, hosting client sites can be one of the most frustrating things about running an agency when something unexpected goes wrong.

For most agencies, providing hosting is a necessary evil. Clients expect it, and it doesn’t feel right not to offer it. At best, it’s a substantial recurring revenue stream that can support your agency through tough economies and at times when you lose clients. Offering hosting is actually really valuable, giving you stability in a project-based business.

At worst, it can be an easy way to lose time and money.

Over the years, we switched hosts dozens of times. In the early days of the business, we started out with cheap, shared hosting — as you do — and it caused no end of problems. We were plagued with downtime, sites weren’t just slow they were comatose, and trying to migrate from one server to another was like pulling teeth.

If a site was slow on the front-end, it was bad, but it was usually slower on the admin side of things, so backups, editing, installing plugins — all the stuff agencies do — became maddening.

VPS hosting seemed like the answer. But while it’s “managed” in theory, we found ourselves managing servers ourselves — optimizing performance and security, requesting software updates, running backups, etc. All of a sudden, you’re an IT firm versus a design agency. No one has started a marketing agency because they wanted to run servers!

This took time away from our core business and we hated it. We wanted to build sites, not manage servers. It wasn’t sustainable.

So we tried managed WordPress hosting. “Of course you should get managed WordPress hosting” is considered something of a truism amongst WordPress developers. But again, it wasn’t really “managed.” It wasn’t uncommon for our server to crash due to traffic spikes or excess database usage. Most hosts didn’t notice or seem to care when our sites were down until we told them.

In 2019, the rest of the market has evolved. People are smarter and more dependent on their websites than ever. The reality is, these legacy hosting providers simply don’t cut it anymore.

There are more web hosting providers than ever — 338,561 as of May 2019. Yet, agency owners like myself are still searching for that elusive, unicorn web host that can check those three boxes we also want: performance, security, and uptime.

In the past 10 years, no real innovation has occurred. The technologies have become much more advanced but WordPress hosting is lagging behind. The market is ready for change.

Traditional hosting simply doesn’t cut it. For one thing, it’s slow. Hosts put the onus back on users to improve their site speed when a large chunk of performance optimizations can be implemented server-side. Caching plugins are a complete waste of time — hosts should build caching into their server architecture and stop wasting users’ — and site visitors’ — time.

Uptime is unreliable. The average website is down 3 hours a month due to the downtime of web hosting providers. The average web host has 760 outages and uptime of 99.59% throughout the year. That might seem like a solid amount of uptime, but when you break it down, that’s 1.5 days a year that your site is offline. Not good enough.

Think your site is secure with managed WordPress hosting? Not a chance: 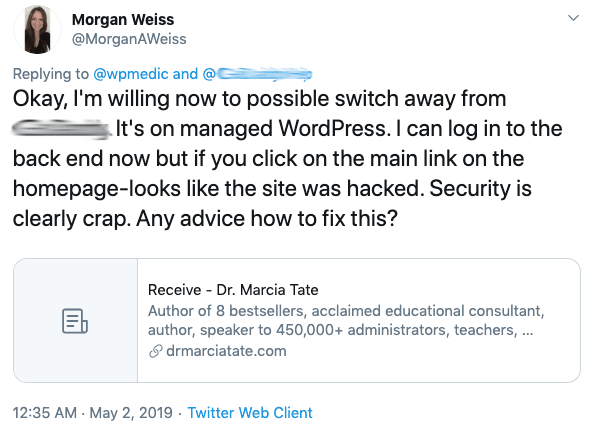 Speaking of support, filing a ticket is so 15 years ago. Yet, it’s how web hosts still want you to get in touch when something goes wrong. Sure, there’s live chat, but it’s just a way for hosts to corral helpless customers, forcing you to wait around while an overworked support member tries to help everyone at the same time, while not really helping anyone at all.

Then there’s the cost of traditional hosting, which is long overdue for a shakeup when it comes to two things: capacity and pricing.

Monthly hosting packages offer set resources for a monthly fee you’re expected to pay, even if you use only a fraction of what you’re paying for.

Say, for example, you signed up for an account with Flywheel. Their Agency plan is $266 per month for up to 30 sites. The problem is, if you only have 15 sites with 100,000 monthly visitors, you’re leaving all that unused capacity on the table — and wasting money in the meantime. No matter how much capacity you use, you still have to pay the same monthly fee.

For agencies that need hosting for client sites, issues around capacity and pricing are compounded. If you have one client who gets 50,000 visitors a month but 15 other client sites that only get 5,000 visits each, you’ll undoubtedly end up overcharging your smaller clients.

Is it fair that clients should have to pay the same price for hosting, no matter how much capacity they use? Absolutely not.

Over my career, I have worked in both small business and Fortune 500 companies. I have had the honor of being a presenter for organizations like Microsoft, Intuit, Sage Software, RealPage, NARPM, NAA, and the Small Business Administration. Most recently I completed my first ebook, Infographics in Action, which teaches exactly how to create and market with infographics. Currently, I work in San Francisco and reside in the bay area with my wife and four children. Feel free to drop me a line, I would love to hear from you!
Free Resource
Get Performance Tips In Your Inbox
Subscribe to our newsletter covering performance, innovation & running WordPress at scale.
Spotlight

This is what inspired me to build a product…

You might be thinking, “If you’re so tired of traditional web hosting, why don’t you get off your ass and do something about it!”

It’s called Convesio and it’s the next generation of managed WordPress hosting. It’s the hosting I wanted 20 years ago — and have been offering to beta customers for several months now.

Every time I switched web hosts over the past 20 years, it was in the hope that I would find a host as obsessive about uptime, performance, and security as I was. But as technology progressed, it seemed web hosts had little motivation to truly innovate.

Convesio is the first self-healing, autoscaling, platform-as-a-service for creating and managing WordPress sites. We started out rethinking how a WordPress stack should operate — every component needed to utilize the latest tech and how to optimize it to get every drop of performance out of WordPress.

It’s reliable “when you need it” hosting. Users can create high-availability, scalable WordPress sites in less than a minute. There’s no need to configure load balancers or Docker containers or clusters. Convesio automates the entire process, making it simple and seamless to set up and scale in future.

Features at a glance:

We’ve also adopted Fair Use Pricing. Convesio users will never pay for a site in development or for staging sites, only for live production sites. That means you’ll only start paying for hosting once you start billing clients.

Convesio’s proactive support is next level. We actively monitor site uptime, backup schedules, SSL renewals, and other critical system stats. If we notice any issues, we jump in and fix it — no support ticket required. Our aim is to identify and resolve any issues with your sites before you notice them.

Our beta customer John Schulz sums up our support:

“It doesn’t seem like they are ever really off. They are able to take support requests seriously morning, noon, or night. I’m always surprised and never disappointed. These guys are the real deal, a dream team.”

Of course, when you need to talk to a real person, including requests for advanced and custom support, our expert team responds fast thanks to our integrated Slack support.

Hosting should be something you never have to think about, it should just work. But time and time again, traditional hosting fails. It’s slow, it’s unreliable, it’s not secure, and when you need help you’re on your own.

Self-healing servers, auto-scaling, high availability, server-level caching, real-time customer support, pay as you go pricing… these are not “nice to haves” but “must-haves” your agency can have right now with Convesio.

We’re future-proofing WordPress. If you are serious about running your online business or best supporting your clients’ websites, it’s time to work with the next generation of managed hosting. Traditional hosting will suffice for the short-term or small projects, but you reap what you sow when it comes to your website.

We’re raising our first round of funding now. Join Convesio and leave behind traditional, legacy hosting.

Over my career, I have worked in both small business and Fortune 500 companies. I have had the honor of being a presenter for organizations like Microsoft, Intuit, Sage Software, RealPage, NARPM, NAA, and the Small Business Administration. Most recently I completed my first ebook, Infographics in Action, which teaches exactly how to create and market with infographics. Currently, I work in San Francisco and reside in the bay area with my wife and four children. Feel free to drop me a line, I would love to hear from you!
Free Resource